The U.S. wastes 31 to 40% of its post-harvest food supply, with a substantial portion of this waste occurring at the consumer level. Globally, interventions to address wasted food have proliferated, but efforts are in their infancy in the U.S. To inform these efforts and provide baseline data to track change, we performed a survey of U.S. consumer awareness, attitudes and behaviors related to wasted food.  The survey was administered online to members of a nationally representative panel (N=1010), and post-survey weights were applied. The survey found widespread (self-reported) awareness of wasted food as an issue, efforts to reduce it, and knowledge about how to do so, plus moderately frequent performance of waste-reducing behaviors. Three-quarters of respondents said they discard less food than the average American. The leading motivations for waste reduction were saving money and setting an example for children, with environmental concerns ranked last. The most common reasons given for discarding food were concern about foodborne illness and a desire to eat only the freshest food. In some cases there were modest differences based on age, parental status, and income, but no differences were found by race, education, rural/urban residence or other demographic factors. Respondents recommended ways retailers and restaurants could help reduce waste. This is the first nationally representative consumer survey focused on wasted food in the U.S. It provides insight into U.S. consumers’ perceptions related to wasted food, and comparisons to existing literature. The findings suggest approaches including recognizing that many consumers perceive themselves as being already-knowledgeable and engaged, framing messages to focus on budgets, and modifying existing messages about food freshness and aesthetics. This research also suggests opportunities to shift retail and restaurant practice, and identifies critical research gaps. 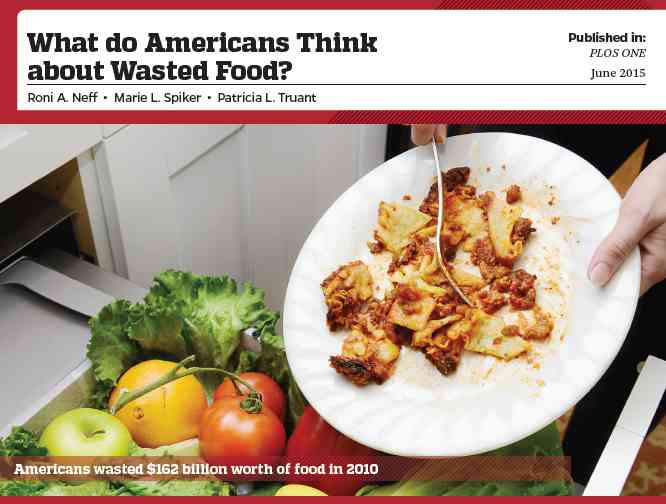 Reducing Food Waste in Your Restaurant