This report provides an overview of the wasted food ecosystem1 in Alameda County, with a primary focus on food for people and a secondary focus on food for animals, in line with the US EPA’s Food Recovery Hierarchy. Prepared for the Northern California Recycling Association (NCRA), its purpose is to lay the groundwork for future efforts by all interested parties.

Highlights include over 50 policy and program solutions that could be implemented locally and a series of infographics that put our food waste prevention and food recovery challenges and opportunities into focus.

Businesses and institutions in Alameda County are discarding approximately 72 to 115 million pounds of potentially edible food each year, mostly to local landfills.  Coincidentally, this amount of wasted food equals, by weight (if not nutritional composition), one additional meal per day for every food insecure county resident.  Wasting edible food while county residents go hungry is troubling, and the potential to address the problems together is promising.

Producing, processing and distributing this food consumes some 5 billion gallons of water (or 9% of the county’s household water use). And the roughly 56 to 87 million pounds which ends up in local landfills rather than being eaten, composted or otherwise recycled, generates over 38,000 tons of greenhouse gas emissions, or the equivalent of a year’s worth of driving for over 7,000 passenger cars.

Recovering the wasted food in Alameda County is estimated to cost about $51 million ($0.72 per pound), and could generate about $286 million ($4 per pound) in societal economic benefits, calculated as the present value over 10 years of the combined financial benefit to consumers, businesses, governments, and other stakeholders minus all investment and costs.3

An estimated 6 million pounds per year of surplus food from businesses and institutions is currently being donated to food assistance organizations in Alameda County, a practice known as food recovery. Over half of this food recovery is coordinated by the Alameda County Food Bank and its member agencies through its Grocery Rescue Program.

At the same time, new measurement and tracking suggest that as much as 20 million pounds of potentially wasted food could be preventable in food service operations in the county.

Senate Bill 1383, signed by Governor Brown in September 2016, requires local jurisdictions to reduce or recover for human
consumption 20 percent of edible food that is currently sent to landfills and incinerators by 2025, translating to 11 to 17 million pounds in Alameda County using 56 to 87 million pounds as an estimated baseline. Based on these estimates, the scale of current prevention and recovery efforts would need to double or triple by 2025. 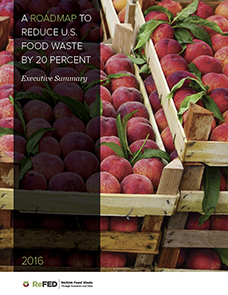